Leadership survey 2021 presented by “Wertekommission”: Responsibility as a core value

The Wertekommission – Initiative Werte Bewusste Führung e.V. has presented the results of its 2021 leadership survey which was initially published by Handelsblatt. The study revolves around the values of managers in Germany. It is supported by the TUM Institute for LifeLong Learning and scientifically accompanied by the Chair of Research and Science Management at TUM. This year’s edition centers around the value of responsibility: Should managers position themselves politically, for example? And how responsible do they feel in the area of sustainability?

On the question of whether executives in German companies should speak out publicly on political and social issues, the respondents have a split attitude: 56 percent favor a political positioning, 44 percent disagree. The assessment is related to their position: Among those in favor, a large proportion come from top management. The respondents consider a clear position to be relevant, particularly on the issues of racism, discrimination and anti-semitism, and see themselves as having a definite responsibility in this area. 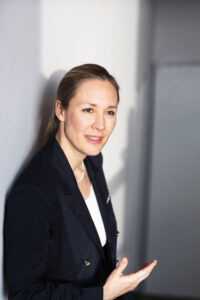 “The young generation clearly expects CEOs to take a stand on major social issues and thus show what their company stands for and stands up for. Joe Kaeser will not remain an isolated case,” Prof. Dr. Peus explains in an interview with Handelsblatt, which exclusively published the study a day prior to the official release.

Trust increases in relevance for leaders and managers

Responsibility, the core value that formed the focus of this year’s survey, is also generally among the most important values for the managers surveyed: At 27 percent, it ranks second behind trust (32 percent), followed by respect (17 percent). Looking at how the importance of the values changed compared to the previous year, 37 percent of managers say that trust is increasing in importance – the biggest change across all values.

One of the most pressing issues of our time is sustainability in all areas of our lives and economy. What is the position of executives on this issue and do they associate the value of responsibility with it? The survey shows: Not even one in two executives in Germany is actually aware of the United Nations’ Sustainable Development Goals.

“For me, this is a sign that the debate about sustainability is often still far too buzzword-like and abstract,” said Prof. Dr. Peus in the interview with Handelsblatt. “There is a lack of concrete implementation of how sustainability can be more firmly anchored in the company, among employees and among customers.”

At the same time, three-quarters of executives see German business sharing responsibility for implementing the Sustainable Development Goals (SDGs), which are to be achieved by 2030. Awareness of the relevance of sustainability and the responsibility of one’s own person or company, are present and should be seen as a positive sign, the Values Commission concludes.

About the survey and the Wertekommission – Initiative Bewusste Führung e.V. 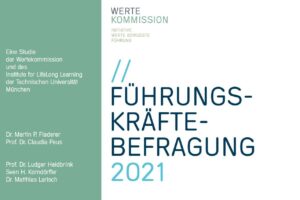 The Wertekommission conducted the survey regularly since 2006 to measure the “values pulse” of German managers. The aim is to survey the most important values of leading executives and their assessment of the influence of digitization. Between May 19 and June 6, 2021, 536 professionals from the German business community participated in the online survey, of which around 34 percent were from top management, 53 percent from middle management and 13 percent from lower management.

The online survey was conducted in collaboration with TUM’s Chair of Research and Science Management and the Institute for LifeLong Learning.

The complete evaluation can be found on the German-speaking website of the Wertekommission. 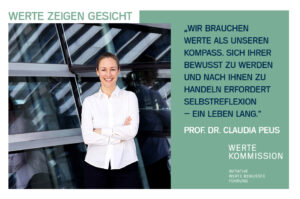 By the way: Prof. Dr. Claudia Peus is part of the campaign “Values show face” of the Values Commission and in this context advocates self-reflection and the “inner values compass” for executives.