What effect does gender-stereotypical wording in recruitment advertisement have on potential female applicants? And how does the gender of the recruiter influence women pursuing their career goals? Following calls for research to increase gender equality, a team of four professors, among them our Founding Director Prof. Dr. Claudia Peus, conducted several studies to provide new knowledge in this field.

The publication called “Sounds like a fit! Wording in recruitment advertisements and recruiter gender affect women’s pursuit of career development programs via anticipated belongingness” has recently been published in the research magazine “Human Resource Manager”. The research team investigated women’s intentions to pursue career opportunities, in the form of career development programs. They argue: Women’s but not men’s pursuit of career opportunities are indeed influenced by recruiter gender and gender-stereotypical wording in recruitment advertisements.

A very important topic to keep in mind, also for recruiters who are responsible for job ads: Facilitating women’s participation in career opportunities is one way to enhance diversity in leadership.

Recruitment advertisements for job positions are often not gender-neutral but contain wording through which one gender is targeted more than the other. Past research has shown that gendered pronouns, position titles, pictures, and applicant requirements in recruitment advertisements can influence women’s attraction to organizations and their interest in positions or career opportunities. One reason why women are hesitant to apply is that there is a perceived lack of fit between career development programs and women’s personal characteristics. 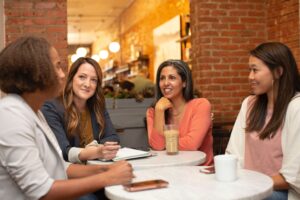 The so-called “lack of fit” theory the publication was based on partly, suggests that when women compare their personal characteristics with the stereotypically masculine characteristics of career opportunities, the mismatch reduces their interest in pursuing such opportunities.

Among other findings, the researchers found that women’s perceived lack of fit with career development programs indeed will be attenuated if organizations employ advertisement wording that aligns with women’s self-characterizations (i.e., stereotypically feminine rather than masculine wording).

Gender of recruiter plays an important role for female applicants

But not only the wording is important, as the “signaling theory” suggests: It shows that virtually anything potential applicants observe during the recruitment process can serve as an indication of the characteristics required for the career opportunity.

In a video-based experiment with 329 university students, the four researchers found that when a male recruiter used stereotypically masculine compared to feminine wording, female students anticipated lower belongingness, expected lower success of an application, and indicated lower application intentions for career opportunities. These differences in female students’ evaluations disappeared when the recruiter was female.

The research project was funded by the German Federal Ministry of Education and Research (BMBF) and the European Social Fund (ESF) The whole article can be read here.

The research team consisted of the following persons: